A few weeks ago we talked about Latin and some of its expressions that persist until today, even in daily use. In the title of this post we make reference to the fact that these expr 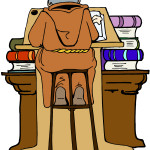 essions are the resistance of a dead language. However, aside from these expressions, which are used in all fields, Latin continues to be the official liturgical language of the Catholic Church of Latin rite, and is the official language of Vatican City.

So then, is Latin really dead? A language is classified as dead or extinct when it is nobody’s native language and is therefore not used in any natural community of speakers. Although a dead language may continue to have certain uses, such as for example liturgical ones, since it is not acquired by anybody as a native language it ceases to continue down the normal path of evolution and development that living languages follow throughout time.

This lack of evolution is part of what makes Latin the ideal language for liturgical and theological issues, since, as it doesn’t change, the meaning of words remains stable. The underlying idea is that texts written in this language will maintain their meaning much more solidly than if they were written in a living language that evolves and whose meanings may therefore change.

Nevertheless, although it is true that Latin does not follow the natural evolutionary path of living languages, it is interesting that in recent centuries it has continued to enrich itself with new words and expressions – and not just a few. According to Pierre Georges, these amount to about 60,000 words, among which we can cite vis atomica (nuclear power) and res inexplicata volans (UFO) as examples.