Bon Appétit: French and Spanish Words in the Culinary World 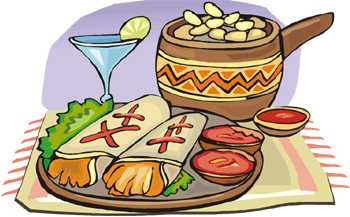 For food connoisseurs such as myself, ahem, I am always looking to try new cuisines. But even if you aren’t too interested in expanding your culinary horizons, there are plenty of foods of international origin that have become mainstays in the United States. As a translator, it is very interesting to look at how some of these have had their original names changed to English, whereas others have retained their original languages. Let’s take a look at some words used in the culinary world that have remained in their original language.

In the United States, many words from the Spanish language are used when describing certain dishes or drinks. Take for instance the piña colada drink. Quite literally it means “strained pineapple,” and from a marketing point of view you can see how this doesn’t sound as fun or as tropical as piña colada. Quesadilla, taco, burrito, and guacamole have all also been kept as is.  These words are all easy to say, nowadays, and since there is no culinary equivalent in English speaking countries, the need to create a new word was sidestepped.  The word tapas is a word frequently used in restaurants. Tapas (a food of Spanish origin) are neither appetizers nor main dishes; in fact, they are not really considered a full-fledged meal at all. Tapas consist of small plates of cold or hot food (such as mussels with garlic, or fried goat cheese) that accompany cocktails or wine, and are meant to encourage conversation.

French words are probably the type most commonly used in the world of gastronomy because of France’s prominence in this realm. Hors d’oeuvre is a term known to many as a sort of appetizer or small bit of tasty food. These are quite similar to tapas, except that afterwards, they are usually followed by a full meal. Another common phrase is du jour, which literally means “of the day” in French, and in many restaurants means the same thing (i.e., soup du jour, or soup of the day).  À la mode to many people means “with ice cream on top,” but this is actually a misconception. À la mode literally means something that is in style, or trendy (mode means fashion). Another phrase, à la carte, is used to describe something “on the menu” in English, and in French literally means, “according to the menu.”