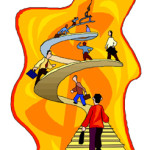 Imagine you are going to a dentist’s appointment for the first time in a new building. Imagine also, that not only are you about to walk into a new building, but that you are also in a new country. The address says 400 Main Street, 1st Floor, Office B. You walk up a flight of stairs to what you assume is the first floor, knock on the door that says “Office B,” and patiently wait for someone to open the door. However, something strange happens when the door opens and you are greeted by a receptionist for a law firm. Luckily, the kind receptionist directs you to the ground floor to the office you are looking for. What happened to this confused person?, you may be wondering. In fact, in South American countries, the first floor of any building is actually the second floor to us North Americans. The actual first floor to us is called “PB,” or planta baja, in South American countries. Planta baja literally means ground floor in Spanish and tends to confuse people from both countries, especially when traveling. Therefore, in Argentina, for example, when something says that it is on the 1st floor, it is actually what we would consider to be the 2nd floor, and so on.

Curious confusions like the one mentioned above happen quite often, but thankfully, they only play minor tricks on us and do not cause serious damage. In one of the first blogs I had ever written, I mentioned some actual mistranslations which proved to be quite dangerous in certain instances. But for the sake of innocent entertainment, let’s observe some other strange situations one may get oneself involved in!

What if you are looking through a menu (in a Spanish speaking country), and you see the word entrada? You would probably assume that this refers to the entrée, or main dish (in the U.S.). But in fact, in Spanish, entrada means appetizer! The plato principal is the actual main dish. Let’s imagine another similar situation, shall we? In Portuguese, the word breakfast is known as café da manhã so, most likely, if you saw this on a menu, you would assume you were ordering a simple coffee, but picture instead being served a full breakfast! I’m sure that this has happened on more than one occasion.

Has something akin to this ever happened to you? I admit that the “fictional” person in our first story is not so fictional after all…