Home » Blog » For Translators » The Translation of Humor in Asterix

The Translation of Humor in Asterix 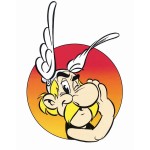 Asterix was one of my first devotions as a reader. I started reading the comic so young that, even before understanding that the story takes place somewhere in Europe two thousand years ago, I noticed that the coexistence of different languages was a very present element throughout the strip. This occurs between the language to which the original text was translated to and the language that was widely spoken in the Roman Empire during the time in which the comic takes place. For many words ending in –um, there are footnotes that provide a Spanish equivalent that illuminated a characteristic enigma of the collection.

Thanks to my first incursions in Goscinny and Uderzo’s masterpiece, and well before becoming a professional translator, I had my first questions regarding the task that summons me today, as well as questions about how effective the translation of a humorous text can be if, to a large extent, humor is based on the contrasting of different languages.

The conservation of the use of Latin, at the expense of the language in which the text was translated, clearly attests to the function that they wish to assign to said language. What would happen with these Latin words, thought the young boy, if Asterix were translated into Latin?

The translation is present in many chapters, mainly in Asterix the Legionary, in which people from the entire Roman Empire coexist and who are articulated by means of an interpreter. On the other hand, the passing nature of the strip’s characters brings them, episode after episode, close to an enormous variety of cultures that foster a humoristic formula based on the permanent contrasting of languages.

For example, in Asterix in Britain, there are numerous jokes about the English’s way of speaking, Saxon grammar (as opposed to Romance grammar), and an infinity of clichés, such as “stiff upper lip,” which in the Spanish version was translated literally as “mantén tu labio superior firme” [keep your upper lip stiff]. With the scarce knowledge of English that I had at the time of reading this chapter, I could nevertheless understand the humor in such a forcedly literal translation, but I could not stop thinking about how these jokes would work if translated into English.

The names of characters also constitute a call for attention for those of us who live with more than one language and can’t avoid asking ourselves how a given person’s name would work in another language.

The Gallic druid, who in Spanish is named Panoramix, in English receives the not very subtle name of Getafix, which could mean something along the lines of “Get a dose” (of a recreational drug) and alludes to the magic potion that he produces. In the ephemeral US version of the comic, the druid was named Magigimmix (which could be translated as magic tricks). In its version for English newspapers in the 70’s, he was named Readymix (although it coincided with a British cement company), since Getafix seemed little apt for children.

Some of the 114 translations of Asterix are true works of virtuosity, capable of recreating in “the target language the word games, allusions, and witty formulas analogous to the originals in French” (Wikipedia).

Tweet
PrevPreviousWhat Are the Differences Between Spanish and Catalan?
NextImpressing Clients with MenusNext