A History of Writing and Letters 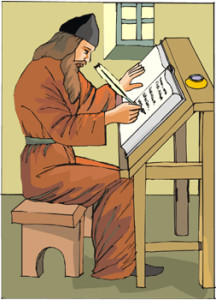 When we start school as children, we are taught how to write. As a translator, I find it interesting to investigate where letters and forms of writing come from. After doing some research, I found that the alphabet that we use today, the Latin alphabet (which is used in both English and Spanish, for example) was based on the Greek alphabet, which comes from Phoenician, which in turn has its origin in the Coptic Egyptian language (a cursive form of hieroglyphs).

Even before the ancient Egyptians used papyrus to write hieroglyphics on their scrolls thousands of years ago, the Sumerians were already writing on a type of paper they themselves had invented.

I think it is impossible to precisely determine who invented writing, as it is an art that has evolved over time. Markings used for counting have even been found in primitive prehistoric caves.

The history of writing utensils that humans have used to record and convey their thoughts and feelings over centuries is a fundamental part of the history of civilization itself. Thanks to these communication methods, such as drawings, signs, and words recorded by our predecessors, we are able to learn more about our history.

One of the first inventions by cavemen was a hunting tool using a stone sharpened by hand. This stone, in addition being a lethal weapon, was also adopted as the first writing utensil. The cavemen found ways to create images and drawings with this tool on the walls of their cave. The cave paintings depict everyday events, such as the planting of crops or successful hunts.

The first writing utensils that are closer to the pen and paper we know today were developed by the Greeks, who used a pen made ​​of metal, bone, or ivory to place marks on a type of waxed table. The first examples of handwriting originated in Greece. Writing began moving beyond images on stone or marks on wet clay. The Chinese invented and perfected “India ink,” a mixture of soot from smoked pine and oil lamps. This ink, which was invented by the Chinese philosopher Tien-Lcheu (2697 BCE), had become a commonly used writing tool by 1200 BCE. Later, other Eastern cultures developed inks using natural dyes and colors derived from berries, plants, and minerals. In early writings, different colored inks had meanings associated with each color.

As for the letters of the alphabet we use today, they originate from ancient Egypt, about a thousand years after the history of writing had already begun. The first formal alphabet arose in 2000 BCE; its main purpose was to represent the language of Semitic-speaking workers. Most of the alphabets of the modern world, such as Greek and Latin alphabets, are rooted there. It is believed that in 2700 BCE, the ancient Egyptians had already invented some 22 hieroglyphs to represent consonants in their language, and another symbol that represented what we know today as vowels.