The Term Bullying in the Spanish Language 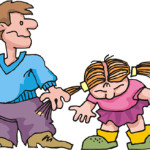 Rioplatense Spanish (spoken in parts of Argentina and Uruguay, near the Río de la Plata) is slowly opening its doors to the name of a concept that is not foreign to us, but for which we lack a term to accurately define what the situation requires. Unlike the case of other foreign words that turned into neologisms approved by the competent national institutions such as the Real Academia Española (Royal Spanish Academy) and the Academia Argentina de Letras (the academy in charge of studying and prescribing the use of the Spanish language in Argentina), bullying is presenting a series of unique challenges. English uses the gerund to refer to the conduct of the person who harasses, abuses, or pesters another, either physically or psychologically, and usually within a group setting. Someone who demonstrates such behavior is called a “bully” in English, which, contrary to popular belief (including yours truly), has no common etymology with the Anglo-Saxon word for bull.
Bullying is nothing new, neither in the world nor in our neck of the woods. Virginia Woolf believed that fascism was a form of bullying, and referred to Hitler and the Nazis in 1934 as “these brutal bullies.” And if we look at cinema, in Richard Linklater’s Dazed and Confused, one can see (by the late 70s) the extension of the tradition of “baptizing” students who finished primary school by their older schoolmates who “welcome” them to high school. Today, the Internet gives a new twist to the behavior in question, placing the phenomenon more strongly in the center of attention, as bullying victims not only suffer this type of offense in the flesh but must also see it going viral in social networks.
A brief search on the different portals of local news (the context in which such terms appeared for the first time) shows a considerable lack of consensus as to the best way to adapt a concept with a foreign name. Other imported concepts came into our Spanish with a little more flow and less discrepancies. Being a gerund form, “bullying” would suppose a verbal core in order to express its undertaking.
In the newspaper Clarín, we find the expression “hacer bullying” (to make bullying) while in La Nación, similarly, we find “realizar bullying” (to perform bullying). However, in no newspaper does a verbalized form of the concept appear, as has happened with other imported terms such as Twitter, from which the verbal form tuitear (to tweet) is derived, just to cite an example. The permanence of the phenomenon and the various measures implemented to prevent it suggest that is here to stay, and we can expect with some degree of certainty that the term will find a way to adapt to our variety of Spanish.