Home » Blog » For Translators » A Sonorous Atlas of the Spanish Language

A Sonorous Atlas of the Spanish Language 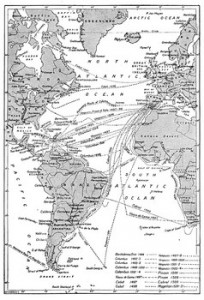 To celebrate the Sixth International Conference on the Spanish Language, which took place last week in Panama, the Spanish newspaper El País had writers from the twenty Spanish-speaking countries (as well as the United States) each choose  one word that best represents their regional variety of the language. The result of the survey is an interesting, sonorous atlas of the Spanish language, which is composed of the nominations by the twenty-one participating writers.

This is, without a doubt, a good opportunity to be amazed once again by the diversity of the Spanish language, which is rich in regional varieties and dialects. The words proposed by those surveyed include:

Argentina: boludo (Juan Gelman). “A very popular term with a high degree of ambivalence today, it refers to a silly, stupid, or idiotic person; however, it does not always imply this derogatory, insulting connotation,” since, more recently, it has been adopted as a term of endearment among friends.

Bolivia: jailón (Edmundo Paz Soldán). “It refers to someone from ‘high society,’ and its connotation tends to be negative.”

Chile: patiperro [literally: dog feet; refers to “itchy feet,” or a desire to travel.] (Antonio Skármeta). “We Chileans have ‘dog feet’. We often leave our hearth and home chasing vague daydreams or due to pressing needs that motivate us to leave the country. Enclosed in a thin piece of land between the sea and the Andes mountains, we want to break limits and nose around.”

Colombia: vaina [pain] (Laura Restrepo). “We exclaim ‘¡qué vaina! [literally, what pain!] to refer to a disaster, and ¡qué buena vaina! [literally, what good pain!] to refer to a triumph or even salvation. To specify its extensive meanings, it tends to be preceded by the demonstrative pronoun esa [that], for example, pásame esa vaina [give me that pain] we say, signaling with our index finger, and we can be asking for anything from a needle to an elephant. Ya salí de esa vaina [I already got out of that pain] alludes to any relief, from having been cured of a cold to having won a lawsuit. For foreigners visiting this land, becoming familiar with the multiple and versatile use of vaina will save them from having to learn Spanish.”

Cuba: asere (Wendy Guerra). “Some people say that it means ‘I greet you,’ whereas others say that it means ‘crazy’ in the Lucumi language. Asere and Asere que bola are the most common ways of saying hello and is distinguishes Cuba from the rest of the world.

Ecuador: yapa (Gabriela Alemán). “…something additional, a gift. When I was ten years old, in all of the bakeries in Quito they gave a yapa to regular customers. They were one or two loaves of bread that established a friendship.”

Spain: contradiós (Álvaro Pombo). “A Spanish colloquialism that is used to describe something that is absurd or irrational…”

Guatemala: kaibil (Rodrigo Rey Rosa). Word of Mayan origin used to describe a special type of commando unit, notorious for its bloodthirsty nature, that fought in the war against the guerillas.

Honduras: pija (María Eugenia Ramos). Means “penis,” a word which Hondurans use to “express ourselves from enthusiasm to indifference, through anger and altered states of consciousness. It is used as a noun, verb, and adjective.”

Nicaragua: chunche (Sergio Ramírez). “A chunche can be anything and everything, from a joker jumping up and down without resting, to a piece of furniture, a device, a tool, or a vehicle.” Just as with the Mexican word pinche, its ample use makes it ubiquitous.

Paraguay: curuvica (José Pérez Reyes). A very small fragment that is the product of grinding a solid material.

Peru: huachafo (Iván Thays). A synonym of the word “tacky,” but goes even futher by being applicable to grammar or society: “Being a huachafo is pretending to be something one is not…”

Puerto Rico: bregar (Mayra Santos-Febres). “…the ubiquity of the word describes a way of life. One must bregar [struggle] a lot when living in Puerto Rico.”

Uruguay: celeste (Claudia Amengual). Meaning “light blue,” the term refers to the color of the country’s national soccer team jersey as well as of the national flag.

As interesting as the proposals of the writers are those of the readers, which can be found in the original publication of the survey (in Spanish). Clearly, if there is one thing that Spanish does not lack, it is expressivity.