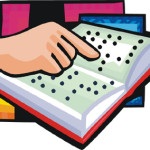 Have you ever hopped onto an elevator, pressed on one of the buttons, and felt strange little bumps under your finger? Chances are you have. These little bumps are part of a tactile (i.e. perceptible to the touch) writing system for use by blind people. The system is made up of a combination or pattern of raised dots or points that represent letters, thus allowing users to analyze them in order to create words. Braille was both invented and named after Louis Braille, a Frenchman who, following an accident in childhood, went blind and afterwards developed this unique communication system.  Louis developed the system based on another communication technique known as “night writing,” which uses a system of raised dots for reading and writing. This system was developed by French Army Captain Charles Barbier de la Serre for soldiers to be able to communicate both silently and in the dark.

While you may not realize it, Braille is used much more often than you think, especially in public spaces. If you take the time to observe your surroundings just a little bit more, you´ll notice that those raised dots are found in many places! Take for instance the ATM. Next time you stop by the bank to make a transaction on the ATM machine, take note of how the keypad contains Braille. Most public and some land-line telephones also contain Braille dots. Many products such as electronic appliances or televisions contain Braille writing on the product boxes. This ensures the visually impaired customer that he/she is buying the desired product and not something else. In many public spaces, warning signs or signs containing important information are also written in Braille. This is important if at a subway stop for instance, a sign is in place to warn people of the proper ways to ride the subway. In fact, next time you go to a public bathroom, check out if there is Braille underneath the signs that indicate men’s and women’s bathrooms. It would be terrible for a man to accidentally step into a women’s bathroom simply because the sign did not say anything. Following the same pattern, check out signs in public buildings, it´s very likely that most of them contain Braille. In fact, if you were to look even closer at those signs, you may notice that the writing (numbers or letters) may be raised or indented. This is another way for a blind person to “read” the sign.

I hope that this article has made you a bit more aware of the interesting world of Braille. Next time you are out in public, see if you find Braille, I just know that you will!