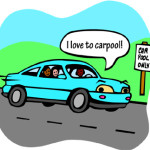 In the previous blog post, we spoke about interesting little terms called compound words. These are formed by linking two words together to create new words. Usually compound words are quite helpful in that they usually reveal what thing it is that they’re referring to (for instance, saltwater is water that contains salt!). Sometimes though, they can trick us into thinking it means something totally different. This is why people learning new languages, and those in the translation field, need to be aware of these (and other) pesky language traps!

Now, let’s look at some compound words in English that make little sense, and their Spanish counterparts (which, in these specific cases, are not compound words).

Butterfly: Interesting, a fly made out of butter? I think not! This word, of course, refers to the beautiful, multi-colored, flying insect. In Spanish, mariposa.

Carpool: It is not a pool with a car in it, or a car with a pool in it; it is actually an arrangement where a group of people take turns driving each other to work, or driving each other’s children to school. In Spanish, there exists no such word that refers to carpool, in this case, one would have to describe the situation.

Chickpea: One of my favorites! This does not refer to a chick or a pea. It is actually the edible seed used to make hummus. In Spanish, garbanzo.

Driveway and parkway: How funny is it that you drive on the parkway and park in the driveway? In Spanish a driveway is usually known as an entrada para coches, and a parkway is known as an alameda (although these words may vary, depending on the country).

Eggplant: It is most definitely not a plant that contains eggs; it is actually a tropical plant widely cultivated for its egg-shaped typically dark purple fruit. In Spanish, berenjena.

Hopefully, now you can see why it is important to always be aware of terms like these, and others like it. And worry not, if a translator of ours happens to see the word “chickpea,” I promise you they won’t put arveja de pajarito!

*All definitions taken from the Collins Dictionary.