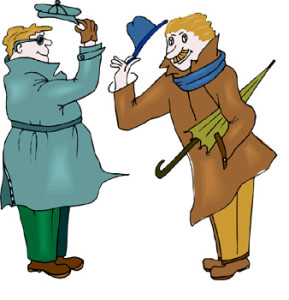 On a daily basis an endless range of human interactions occur both deliberately and accidentally worldwide. Based on the vast differences in customs and rituals in each country, interpreting situations may become quite confusing especially when different greeting gestures are required. This is a crucial factor to take into account when faced with not just an unknown language, but an unknown culture. Trusted Translations offers a variety of interpretation services allowing for both the language and the cultural barriers to be bridged by our experienced and specialized interpreters.

One of the most common greetings used in countries like the Unites States, the United Kingdom and Australia is the simple ‘hi’ or ‘hello’ used in informal situations. In the United States, it is normal for men to shake hands when they meet, but it is quite unusual for men to kiss when they greet each other; whereas in the United Kingdom, a handshake is the most common form of greeting among the English and British people and is customary when you are introduced to somebody new. Often just a peck on the cheek is common in informal situations between men and women and also between women who know each other very well.

Let’s take a look at the custom in a few countries of continental Europe. French nationals for instance, including children, shake hands with their friends and often kiss them on both cheeks, both upon meeting and when leaving. Hungarians like to use the friendly greeting form of kissing each other on the cheeks. The most common way is to kiss from your right to your left. When men meet for the first time, the casual norm is a firm handshake. In Belgium, people kiss on one cheek when they meet, regardless of the gender or how well they know each other. In Russia, the typical greeting is a very firm handshake. Assume you’re trying to crush each other’s knuckles, all the while maintaining direct eye contact. When men shake hands with women, the handshake is less “industrial.” It is considered gallant to kiss women three times while alternating cheeks, and for elderly women a kiss on the hand is given. In Albania, men shake hands when greeting one another. Depending on how close the men are with each other, a kiss on each cheek may be common as well. When a man meets a female relative, a kiss on each cheek, or two per cheek, is common. With friends or colleagues, normally a light handshake will do. Women may shake hands or kiss each other on both cheeks.

In Asia, on the other hand, greeting that involves physical contact is very rare. In Japan, for instance, the common greeting for both men and women is to bow to each other, as opposed to giving a casual handshake or a hug which is rare in Asian cultures. China is one of the most conservative countries in Asia, just like Japan, it’s not a touch-oriented society. When meeting someone for the first time, they would usually nod their heads and smile, wave politely or shake hands if in a formal situation. In Vietnam for example, women do not shake hands with each other or with men. Physical contact between grown-up relatives or friends (both males and females), or between the same or opposite sexes, is not a common sight. Many may greet by bowing slightly to each other, they may join hands. Usually, higher ranking people are greeted first (the family head).

An extensive amount of experience about a specific culture is required by an interpreter when dealing with foreign clients, from basic greeting etiquette to more in-depth communication. Please feel free to read further about our interpretation services and to request a free quote.