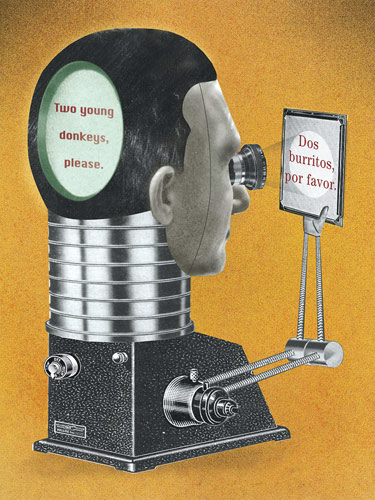 I realized something the other day while reading a long article that had been translated from Spanish into English and had obviously been put through Google Translate For Translators (GT4T) or a similar program. Machines cannot replace humans! Not yet, anyway.

This particular source text was written in very poor Spanish, and parts of it made little or no sense whatsoever. Unfortunately, a machine cannot mirror a translator’s ability to make sense of a phrase by the surrounding text and context or by using their best judgment.

It seems the machine has also not learnt that names of people and towns (in most cases) do not change just because they are written in a different language. Buenos Aires, for example, would not be translated to Good Airs, obviously, and Carmel does not become Caramel, as Google Translate suggests.

Lately, machine translation has become all the rage and new computer-based translation services are continually being rolled out, the latest of which include capabilities such as romanization of non-Roman scripts, voice input and SMS translation.

But the most concerning thing about all this new sophisticated software is that some translators – whether due to laziness, an overload of work or incompetency – are submitting translations that have been machine-translated and then edited, even barely edited at times.

Translation requires skill, a lifetime of learning, hard work, expertise, insight and, in many cases, expertise on a particular subject. So use a professional translation service and leave the machine translating to those occasions when time is an issue, when the source text is basic and when there is going to be some very hefty editing!

Tweet
PrevPreviousInternationalization of Websites in Spanish
NextThe Meaning of MokusatsuNext