Technology to the Rescue of Endangered Languages 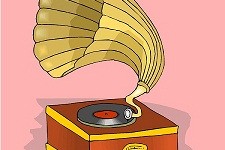 Just as photography was clearly preceded by painting or drawing, or as printed word had written word as its precursor, the recording of sound on the gramophone record lacked a previous, primitive model of representation in which sound recording could be based in order to store and consequently reproduce sound. If one had to find, at all costs, an origin for the reproduction of sound, one would only be able to think about the acoustic phenomenon that is produced when a sound wave is emitted and returns to it source, a phenomenon called an echo, like when someone yells inside of a cave.

Nevertheless, sound recording contributed a set of fairly revolutionary changes. On one hand, it was the first method capable of recording time. Up to that moment, recording and reproduction mechanisms were limited to capturing the visual and textual dimensions of content, but the emergence of the gramophone heralded an age of devices capable of processing continuous flows of information, which would later be plainly demonstrated with the appearance of cinema shortly thereafter.

Moreover, for the field of linguistics, it constituted a very innovative tool in epistemological terms, offering the possibility of protecting the oral communication of a linguistic community. As is well known, linguistic communities are formed and develop until extinguished. Today, there are an estimated 2,400 languages in danger of extinction, and 231 are completely extinct, such as Ancient Egyptian, Gothic, and Coptic. Eastern Siberia, the highlands of the northeastern Pacific in North America, and the north of Australia are critical zones in terms of languages in danger of extinction.

In the same way as photography allowed one to record the visual appearance of an extinct animal, sound recording allows one to leave everlasting evidence of something that until the end of the nineteenth century was completely unthinkable. Since recording devices began to have more portable size and weight, linguists and ethnologists began to take these devices with them in order to record the audible expression of the cultures that they studied.

Nushu, for example, was a language from southern China that was spoken only by women and which disappeared ten years ago with the death of the last old woman who spoke it, according to an official notice from the Chinese government. If the possibility of recording sound did not exist, it would be very difficult today to know how that or any other languages sounded, of which it is estimated that one disappears every 14 days.