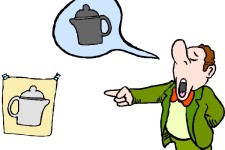 Although there is a very close relationship between Spanish and Portuguese to the extent that oftentimes they display a high degree of mutual intelligibility, there are also considerable differences that complicate the process of learning these languages and translating between them.

Likewise, and as occurs in many languages, we may come across the notorious false cognates. These are words that are written similarly, yet which have different meanings, and which can create so much trouble if we don’t resort to effective research. As examples we can cite estar embaraçada (to be embarrassed) in Portuguese, which should never be confused with estar embarazada (to be pregnant) in Spanish. In fact, to describe being pregnant in Portuguese you use the word grávida. We can also mention the word exquisito which in Spanish means “sophisticated/tasty,” yet which in Portuguese has a completely different meaning of “strange/odd.” Not to mention the rather famous false cognate between these two languages, camisinha, whose meaning is actually “condom” and not “T-shirt” as many Spanish speakers would assume.

Lastly, while there are of course more differences, it’s important to pay special attention to verb conjugations. A clear example of this is the use of the pluperfect in the indicative tense in both languages. For example, the verb cantara (had sung) in Portuguese should be translated as había cantado in Spanish, and should not be confused with the imperfect past subjunctive cantara/cantase in Spanish. Although the trend among Portuguese speakers began to favor the use of the composite verb – in this case, tinha cantado – as we use it in Spanish and English, we shouldn’t be surprised upon finding the simple form in various works of literature.

Thus, we see that even Spanish and Portuguese don’t escape from certain “traps” that may lead us to perform work that is incorrect and, ultimately, of poor quality. Regardless of whether we consider the languages to be very similar, there are many differences that we must pay attention to in order to achieve success. That’s where the merit of a translator lies… in not letting ourselves be led on by the simplistic solution of “intuiting” the meaning of words. Undoubtedly, this is the basis of the ultimate success of our work: to overcome all the obstacles that our profession presents by using the correct tools. A pretty little challenge for those of us who love the art of translating.

To see the original post in Spanish, go to: