The Role of the Interpreter in Afghanistan and Their Plight

What does an interpreter do?

Have you ever been in a foreign country, struggling to make yourself understood? This is where the interpreter comes in. They enable communication between people who don’t speak the same language. Interpreters are everywhere in our day-to-day life. Though, it’s important to note that interpreters aren’t accountable for what is said by the parties they’re translating for.

What is the role of interpreters in armed conflicts?

You are probably familiar with famous interpreters without even knowing it. Think of Sacagawea. Her linguistic skills were put to the test by Lewis and Clark during their expedition into the American West. Or La Malinche, who facilitated Cortés’s conquest of the Aztec Empire. These two early interpreters played major roles in conflicts of their time. A few centuries later, interpreters are still just as important in many fields, and particularly when it comes to facilitating communication between armies and locals. They not only help with linguistic communication but are also the bridge between different cultures.

What was the specific role of the Afghan interpreters? 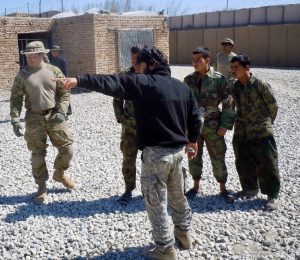 Most American soldiers only speak English. It is easy to see how they would need help understanding the populations found in the Middle East, and in particular in Afghanistan, the two official languages are Pashto and Dari. For most U.S. troops, the only contact with the local Afghan people was through their interpreters. They played a vital role in securing villages from the Taliban, often being right in the middle of active conflict.

What is their current plight and why have they received so much media attention?

After 20 years of occupation, the United States decided to withdraw its troops from Afghanistan by August 31, 2021. This caused chaos and brought a lot of attention to the Afghan interpreters who helped the Americans. As many as 50,000 Afghan interpreters worked for the U.S. Army during the war. While around 70,000 interpreters and their families have successfully immigrated to the U.S., it is believed 20,000 are still seeking a way out.

Why are they so desperate to leave?

It is no secret how much the Taliban despise the U.S. troops and are at odds with the Western world. By choosing to work closely with the Americans, interpreters have become targets of retribution. With the Taliban regaining control of the country, the interpreters who were left behind by the U.S. army are trying desperately to flee.

So why can’t they leave Afghanistan?

If you have ever traveled to another country, you usually would’ve had to apply for a visa. And if you moved to the U.S. and had to apply for a green card, you can attest to how difficult the process is. So, you can imagine how seeking asylum in the United States is a process that needs bureaucratic knowledge, paperwork and time. The chaos induced by the U.S. forces withdrawal, the Taliban occupation and the bombing of Kabul airport have now made this process close to impossible. Many local interpreters are left feeling helpless.

What will happen to them?

In a country divided by conflict, it is easy to understand the desire of local interpreters who worked closely with Western allies to flee for safety. Afghans are desperately trying to get into countries they have worked with during the occupation. Many are applying for asylum in Western countries, or fleeing to the neighboring countries of Pakistan and Tajikistan. In the field of languages and communication, interpreters and translators in general are a very important piece of the communicational puzzle, and during armed conflicts their role comes with an added layer of risk, as in the present case of Afghan interpreters. Let us hope that the efforts and good will of the various Western forces will see to providing a safe haven for these friends in arms.

Tweet
PrevPreviousWhat Is Language Preservation and Why Is It Important?
NextMachine Translation: Expectations vs. RealityNext