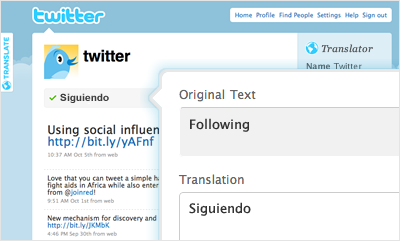 In addition to using automatic translation programs to bridge language barriers in an environment where real-time communication is of the essence, like Twitter, it is possible to use human translators to communicate ideas in other languages.

Another machine translation service is Tweet Translate, with features similar to the previous service. But in this case, we must detail the language that the message to translate is written in.

And on the other hand, we have the option of TweeTrans.com: a human review service for automatic translations with minimum waiting time.

All you have to do is send a message to: @tweetrans in the following format:

“2en” is the code for the language to be translated (en = English).

You can also specify the language from which it is translated. This can be an interesting option if the language detector cannot automatically detect the language of the message. In this case, the format would be:

In the example, would result in es (Spanish) to en (English).

This system offers translations in these languages: