Home » Blog » For Translators » Typographical Symbols and Their Surprising Origins

Typographical Symbols and Their Surprising Origins 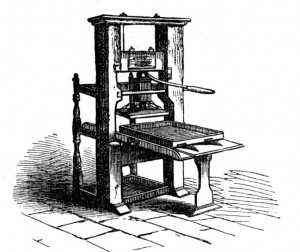 Since the arrival of the printing press in the middle of the fifteenth century, when Johannes Gutenberg’s invention ushered in the modern age, operators of the printing press the world over have had to use their creativity to put in writing what was on everyone’s lips. Clearly, the graphical representation of speech does not begin in 1450, but the meanings of the written symbols became much more fixed thanks to the industrial processes that allowed the mechanical reproduction of works. Thus, at the end of the fifteenth century, the Italian printer Aldo Pio Manuzio was the first to develop the use of the comma [,] to serve as an element of separation within a sentence. Previously, the symbol reserved for short breaks in the speech was the slash [/], but from Manuzio on, this symbol was relegated mainly to mathematical uses (currently, though, with the emergence of the Internet, the slash is enjoying a new era of splendor). Manuzio, who was the most prominent typographer and editor of his time, also imposed the use of the period to end sentences, as well as the modern form of the apostrophe and the written accent.

Other typographical symbols have an earlier origin, such is the case of the peculiar [&], better known as the ampersand. This symbol, whose form evolved from the calligraphy that gives it its Latin name et (it’s made up by the E and the T joined through cursive writing), was already in use two thousand years ago. At that time the custom was to represent the Latin conjunction in the form of a typographic ligature, hence the peculiar written flourish. Its most widespread modern name dates back to the first half of the nineteenth century, when it was part of the English alphabet (it was the twenty-seventh letter). The usual practice was to recite the alphabet and end with “X, Y, Z, and per se and,” which is to say: “X, Y, Z and, by itself, and.” By dint of babbled repetition, and per se and became, quite foreseeably, ampersand.

Of course, there are also symbols of a more recent adoption. The most significant case being the [@] symbol which, although already in circulation in the books of English merchants as a way of expressing a unitary cost (each at: an E within an A), explodes with the emergence of the e-mail and, many years later, Twitter. It is precisely this social network which leads me to think about the typographical consequences that may result from the current trend of condensing messages. What new symbols will be needed in this era when everyone wants to say more with less?