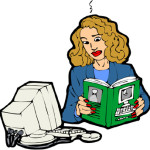 It’s happened to all of us. You see a word you’ve written a million times, but this time, you notice something odd: It is spelled differently than how you spell it. You research and, to your shock, you realize you’ve been using the word incorrectly the entire time! Fear not, this has happened to many of us! I, for one, have had it happening to me in both English as well as in Spanish. In fact, I have used words that are spelled similarly, interchangeably. This week we will focus on some commonly misspelled and misused English words!

Advice and Advise-These words are often used interchangeably (I am guilty of it). We must remember though, “advice” is an opinion or recommendation offered as a guide to action (e.g. Your best friend is giving you advice on how to deal with your recent breakup) and “advise” is when you offer an opinion or suggestion as worth following (e.g. Your friend advises you not to get back with your ex-boyfriend).

Affect and Effect-An “affect” is a verb meaning to produce a change in something (e.g. The music affected her mood deeply), while “effect” is many times the result of that or another action (e.g. The side effects of listening to soothing music have been studied thoroughly).

Conscience and Conscious-“Conscience” is the inner sense of what is right or wrong in one’s conduct or motives (e.g. That serial killer was so depraved he appeared to lack conscience), while “conscious” is being aware of one’s own existence, sensations, thoughts, surroundings (e.g. The man was conscious of the murders he was committing).

Formally and Formerly- “Formally” means to do something in a formal manner (e.g. The restaurant opened formally last week), while “formerly” means at an earlier period or stage (e.g. Formerly, the restaurant used to be a clothing store).

Next week we will observe words from the rest of the alphabet. Do you see any words that you have mistakenly used?

Most definitions taken from https://dictionary.reference.com.

Tweet
PrevPreviousA Road to Success
NextHow Should We Deal with Screenshots?Next