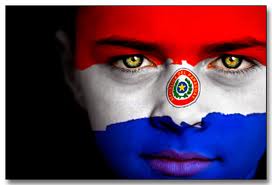 The unique and distinct Spanish spoken in Paraguay today, along with Guarani, has a historical explanation. In Paraguay, the Spanish language brought by the conquerors did not replace the indigenous language of the area, Guarani. On the contrary, Spanish fed on Guarani and the two languages coexisted, resulting in a bilingual population.

If we analyze how the conquest took place in this country in particular, we see that fewer Spanish (who spoke Basque and Castilian) came because it was devoid of economic interest due to the lack of precious metals. As the relationship between these conquerors and the natives was not aggressive, as opposed to the other parts of America that were rich in precious metals, there was a lot of racial mixing and polygamy with indigenous Guarani. This characteristic distinguishes modern day Paraguay, which is mostly bilingual. That is to say that it has both its indigenous language and the language of the conquerors and that both have coexisted up until the present without one replacing the other.

Unlike the process of racial mixing that took place in other parts of America, the Paraguayan population shows the fusion of racial and cultural traits between indigenous Guarani and Europeans. You do not see, as in other places, isolated groups with descendants who have clear indigenous features or European features. 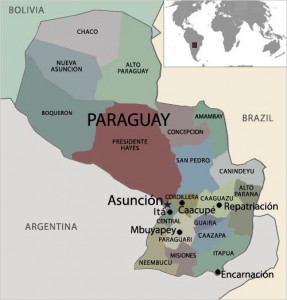 Although there is no approximate percentage of indigenous blood and European blood in the current composition of the population, it is thought that European blood is prevalent in urban regions and that indigenous blood prevails in rural areas. However, it is clear that the current Paraguayan population is the result of contributions from both cultures (indigenous and European). Almost the entire population is bilingual, speaking both Guarani and Spanish.

From the indigenous culture Paraguay has inherited: yerba mate, among other agricultural products, and values such as solidarity and cooperation.

Every day there is more social acceptance for Guarani’s inclusion in the formal education system, the media and its recent adoption as an official language.

Spanish remains the most prestigious language in the country as it is the language that allows for international relations, which promotes economic progress in the region, which lacks the precious metals possessed by other countries in the region that were conquered by the Spanish. However, the Paraguayans are a nationalistic people and that passion is reflected in their knowledge of Guarani.

Unlike what has happened to indigenous languages in Peru, for example, census results from the mid-twentieth century up to the present show that the population is maintaining its percentage of Guarani speakers.

So, we can distinguish two major varieties of Spanish in Paraguay:

1. one that shows marked influences of the predominant indigenous language, Guarani, which is spoken in rural areas where the majority of the population live;

2. and the other variety, that shows similarities to the “rioplatense” dialect due to the geographic proximity of Paraguay and Argentina. This variety of Spanish is spoken mostly in urban areas in Paraguay and influences the neighboring Argentine provinces of Misiones, Corrientes, Formosa and Chaco.

The main characteristics of this variety of Paraguayan Spanish are:

–          Tracings of syntactic structures from Guarani

– Elision of the object

– Useof the diminutive“-í”instead of -ito

– Use of Guarani particles between Spanish words

– Labio dental pronunciation of the V (and, sometimes, the B)

– common use of the expression “che”

– aspiration of the “s”, avoided in formal speech

– the use of “vos” as part of the educated norm

– words and expressions in common

– use of IR + infinitive, instead of the simple future tense