The Translation of Musical Notes 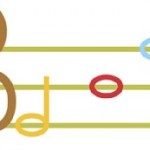 We all know that there are many differences between terms that are commonly used by Spanish speakers and those used in English. Thanks to globalization and the vast amount of information we receive through music, movies, social networking and the exchange of information of all kinds, it’s plain to see that certain basic things are completely different in another language.

For example, when it comes to naming musical notes or reading sheet music, it is important to mention the difference in nomenclature between English and the more Latin-derived languages.

The English system of musical notation is an alphabet-based system. This has its origins in the Greek notation, which named notes from alpha to gamma. We now know this thanks to discoveries made of old compositions, such as ancient hymns and chants. The nomenclature was extended to the Romans and, consequently, to their British colonies.

In English the terms major (/ ma’joɾ /) and minor (/ mi’noɾ /) are derived directly from the Latin terms, which in Spanish are mayor and menor.

When faced with a translation containing such material, it is very important for the translator to spend some time finding appropriate and accurate information. In this way, he or she can convey a more accurate message that the reader will more likely appreciate.