We mentioned in other publications that, normally, the Spanish spoken in Argentina is called “rioplatense”, an adjective that takes it name from the areas adjacent to the River Plate. However, we also mentioned that this was a mistake, as the River Plate also forms part of Uruguayan territory. Therefore, when speaking of rioplatense Spanish one refers to the idioms that are normally used both in Argentina and in Uruguay, two brother countries as far as customs and traditions are concerned.

The differences between each variant are negligible and are indistinguishable for Spanish speakers from other places. The Uruguayan variant is very similar to the Buenos Aires variant (because of its relationship with the port of Buenos Aires), though it does have some differences con the latter, and talk of homogeneity does not apply in this case. The same applies with the Spanish spoken in Buenos Aires and that spoken in Patagonia, which sound practically the same, but have slight underlying differences. 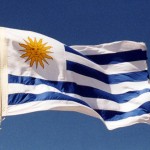 Some characteristics of Uruguayan Spanish are:

Slight influence of Brazilian Portuguese:There are some cases of bilingualism, which is commonly known as Portuñol, similar to what happened in areas on the Argentina-Brazil border.

Slight indigenous influence: idioms from the colonial period. There was a period of time in Uruguay that was influencedby the languages of different indigenous groups such as the Charruas, Minuanes, Charás, and Guaraní. However, these languages disappeared almost without trace, with the exception of some place names that have been preserved and the names of some native species of flora and fauna.

Idioms with European influence: As happens with Argentine Spanish, the European immigration in the twentieth century, especially from the south of Italy and various Spanish provinces, had a strong influence on Uruguayan speech. In some cases, there are also some Gallicisms in educated speech (bulevar, liceo, chofer) that are not so common in other countries in the region, as well as some Italianisms, particularly in food-related words and music.