Winter Olympics and Its Official Languages 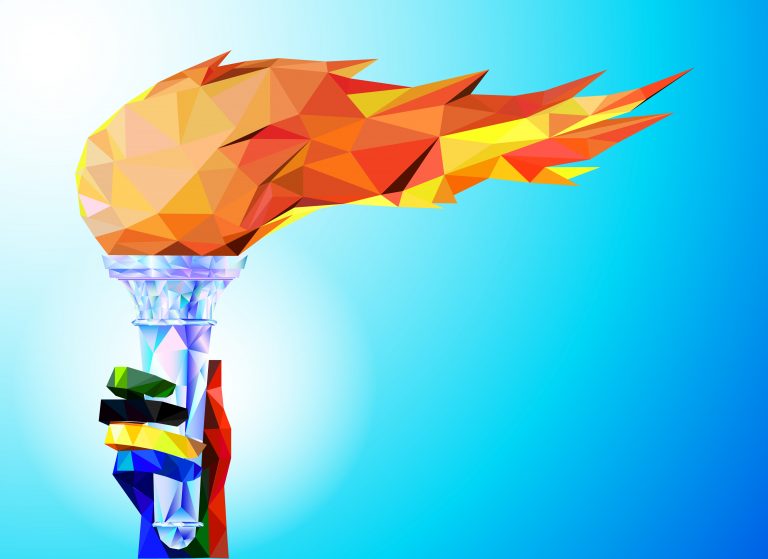 Love winter or hate it, every four years it gifts us with an Olympic Games. This grand spectacle of snowy, icy sport is part of a centuries-old tradition.

The original Olympic Games of ancient Greece were a more modest affair. The first Olympic champion is thought to have won the single event, a short foot race, in 776 BC. The games of the time were part of a festival honoring Zeus.

The holding of the games every four years dates back to these ancient times. They were of such importance that time was measured in the intervals between the contests, called Olympiads.

Gradually gaining additional events, the games became more than sport. Something of a truce took hold during the contests, allowing athletes from rival city-states to compete in safety. Political machinations occurred behind the scenes during the late summer festivals.

The games, having fallen victim to politics and squabbling, were banned in the 4th century. Their days of official grandeur in the ancient world were over.

It is unlikely that the contests ceased entirely, though. The movement to revive the games in Greece in the early 1800s followed centuries of smaller events. Scattered throughout Europe, these festivals took their inspiration from the ancient Greeks.

In 1896 the modern Olympic Games were born, governed by the International Olympic Committee. They sputtered a bit at the start, but took hold and once again became a grand spectacle of both sport and cooperation.

Originally only a summer competition, the Olympics grew and expanded to include winter sports. For many years the summer and winter games were held during the same year, maintaining the original four-year interval.

The winter and summer Olympic Games were disconnected in 1994. There would be contests every two years, though each set of games maintained the traditional four-year cycle.

World events sometimes conspire to disrupt this ancient schedule. The 2020 Tokyo Summer Games were held in July of 2021 due to the pandemic. Fingers crossed that the upcoming Winter Games in Beijing will be held in February 2022 as scheduled.

Why Do the Olympics Have Official Languages?

How does an international competition involving over 200 countries manage communication? The goals of the modern Olympic Games include the sharing of cultures and international cooperation. That’s a big ask without common languages.

The founder of the IOC, Baron Pierre de Coubertin, was French. At the time (1894) French was considered a premiere language of diplomacy. Combine this with the headquarters of the IOC being located in a French-speaking area of Switzerland and you have your first official language of the Olympic Games.

The goal of Olympic official languages is to present announcements and information consistently in languages accessible to a large number of participants.

Currently, the Olympic Games have two official languages, French and English. French is primary, and any discrepancies are resolved in favor of French. All announcements and information are presented in both languages.

English was chosen as the second official language due primarily to its commonality. It is spoken in a large number of participating countries, making it widely accessible.

The modern Olympic Games are held in cities all over the world. The language or languages of the host nation become official Olympic languages during the games.

For the 2022 Beijing Winter Games, the official languages will be French, English, and Mandarin Chinese. Recognizing the language of the host country recognizes their contribution to the goals of the games.

IOC rules state that, in addition to the official languages of each Olympic Games, real-time interpretations are to be provided. Arabic, German, Russian, and Spanish are all available at each session throughout the games.

Recognition that a handful of official languages are not sufficient to meet the needs of all participants is a key to Olympic success. Fostering intercultural understanding and cooperation begins with providing easily accessible forms of communication.

High-quality translation and interpretation provide opportunities for inclusion and the sharing of culture and tradition. As perhaps the most culturally and linguistically diverse event in the world, the Olympics are a golden opportunity to promote cross-cultural unity.

Translation and interpretation also serve a key role in the broadcasting of the Olympic Games. Countries send commentators to present events in their own languages. Access to televised events allows people across the globe to experience competitions in their first languages.

Interpreters and translators are the glue that holds together this multi-national event. Fostering communication between participants and, ultimately, nations, they are responsible for carrying out one of the founders’ loftier goals.

The Olympic Games are not only about sport, they are about unity. Providing a linguistic bridge between competitors, spectators, and national delegations is a vital link.

The Olympics are a deliberately set example of international cooperation. Linguistic accommodations are a hallmark of their continued success.