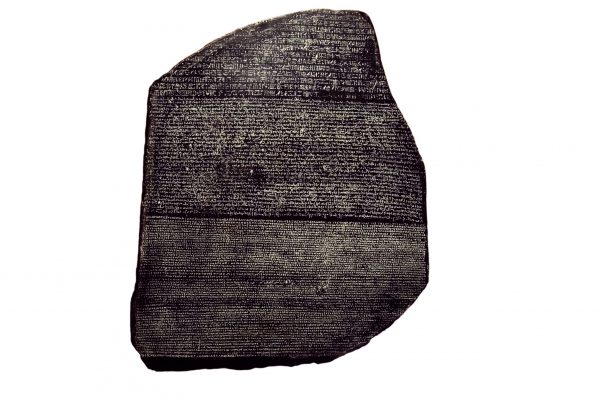 When most Americans hear the phrase “Rosetta Stone,” they probably think of the famous language-learning software. The Rosetta Stone, the software program, is named after an important engraved fragment of stone discovered in 1799. This discovery gave us the ability to decipher Egyptian hieroglyphs, a written language that had been lost for many centuries. Napoleon and his French army are credited for this discovery. Had they not been on campaign in Egypt, they might not have discovered the Rosetta Stone, the master key that would reveal a huge amount of information about Ancient Egypt. The stone revealed to us the key that would crack the meaning behind the strange pictures and symbols that adorned many Ancient Egyptian monuments and unlock many mysteries of the past. This discovery brings to light the fact that some of the world’s most outstanding achievements can come in the darkest of times, like war. And although Napoleon failed to secure exclusive routes to Asia, he did succeed in opening a gateway to the past.

History and Origins of the Rosetta Stone

The stone was found in Fort Julien, a fort in the Nile Delta located near the city of Rosetta and takes its name from the latter. In August of 1799, Napoleon sailed back to France, leaving his troops under the command of one of his generals, after suffering crushing defeats in Syria and in Acre. The unfavorable turn of events meant the French could go home empty-handed. In fact, they lost possession of an artifact that would later be considered one of the most significant archeological discoveries in history.

While the discovery of the Rosetta Stone involved many people, the credit is given to a French officer in Napoleon’s army, Pierre François Xavier Bouchard. In July of 1799, Bouchard was overseeing the rebuilding of Fort Julien’s defenses when the discovery was made. Many may not have seen the value in the discovery, and some may even have considered discarding the stone as rubbish. But, thankfully, Bouchard was able to see the importance of the stone fragment, and while he wasn’t able to make sense of it, he predicted that, because part of the stone was written in Greek, the inscription in hieroglyphics could be translated. Two years later, the stone was taken by the British and transported to London to reveal the secrets of Ancient Egypt, but it wouldn’t be deciphered for another two decades.

Contents of the Rosetta Stone

When the stone arrived in London―and presented to the British Museum by George III, some of the world’s best scholars tried to use it to decipher the meaning of the hieroglyphs. The stone was inscribed in three scripts: Egyptian demotic script and Egyptian hieroglyphs, which had been wholly or partially lost in time, and Greek, which scholars could read and translate. Unfortunately, deciphering the ancient Egyptian scripts wasn’t as easy as they had initially thought it would be. The Greek language had not revealed some elements widely used in these hieroglyphs. The stone wouldn’t be deciphered and understood until September 17, 1822, when French linguist Jean-Francois Champollion confirmed that the hieroglyphs represented words as well as sounds, something that a lot of scholars had overlooked before. With his new interpretation of the phonograms, he could now translate the Egyptian text on the Rosetta Stone, unlocking the secrets of countless engravings and texts.

Linguistic Significance of the Rosetta Stone

Before these advancements in the decipherment of the Rosetta Stone in 1822, the meaning of the curious pictures and symbols that decorated pyramids and walls all over Egypt was largely unknown. Not even the Egyptians could understand the meanings behind these symbols, leaving a lot of ancient Egypt’s rich culture and history a mystery. Now that they were able to decipher hieroglyphs, linguists and scholars had a way of interpreting other ancient Egyptian texts. This was a breakthrough in revealing many mysteries of Ancient Egypt to the entire world. What we know of Ancient Egypt today was in great part made possible by the discovery of the Rosetta Stone. The Rosetta Stone turned out to be a Ptolemaic Decree affirming the royal cult of Ptolemy V that dates back to 196 B.C.

Curious Facts About the Decipherment of the Rosetta Stone

Champollion was a prodigious philologist in his youth. He had written his first public paper on deciphering demotic script and had already mastered several ancient languages while he was still a teenager.
Athanasius Kircher, a 17th century German Jesuit scholar had already published translations of ancient Egyptian hieroglyphs long before the discovery of the Rosetta Stone. Most, if not all of these translations, however, turned out to be completely wrong.
Our linguists may not be trained to decipher ancient Egyptian texts, but, when it comes to modern languages, they excel in breaking down communication barriers to help meet your organization’s linguistic and commercial goals.

Tweet
PrevPreviousDo You Speak Aranese?
NextThe Time for Your Brand to Speak Spanish Is Now!Next